Visit our COVID-19 landing page, where Council is aggregating information about the pandemic at a local level.

Find out more here
Newsroom
Back

Council and small business join forces on professional development in 2020 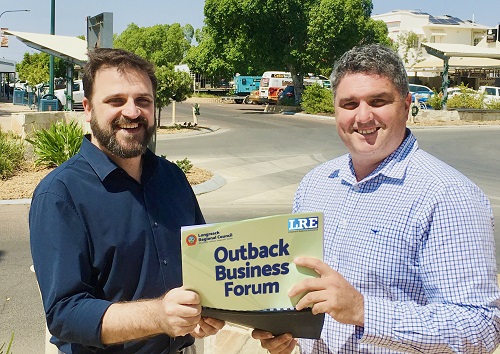 Longreach Regional Council has announced it will partner with small business advocacy group Longreach Regional Enterprise to deliver a flagship series of professional development and networking events in 2020.

The Outback Business Forum has been designed to add value to the regional economy by giving access to specialist business advice that is otherwise unavailable in-region. Council will coordinate with Longreach Regional Enterprise in the delivery of the program, which will be offered at a nominal charge.

Held on four occasions throughout the year, each Outback Business Forum event will feature an industry-leading guest presenter imparting best-practice knowledge and skills. Planning for the first of the four events is already underway – the inaugural Outback Business Forum has been scheduled for Wednesday 11 March 2020 from 5-7pm at Qantas Founders Museum; with Brisbane Broncos CEO Paul White confirmed as guest presenter.

Brecken Curtis, President of Longreach Regional Enterprise, said he couldn’t have asked for a better opening speaker than Paul White.

“Paul has an amazing story to tell, apart from running the only publicly-listed sports franchise in Australia” he said. “Paul also has a lot to teach about managing a team culture and overcoming adversity – both professional and personal.”

During his talk at the Outback Business Forum, Mr White will outline the importance of running businesses on core values. Diagnosed with a brain tumour in 2015, the Outback Queensland Policeman turned Broncos CEO says he continues to face challenges head on.

“I’ve always taken on challenges. I hope that through my own journey I can help others and reinforce that I’m up for the fight and that it’s a fight I intend to win.”

“It’s something you’ll see us focus on more and more in the New Year” he said. “It would be easy for us to spend all our time looking for an economic saviour – a big corporation to come to town, a major new development, or something similar.

“But we believe more meaningful change can be brought about by adding strategic value to our existing economy. We want to focus more on making what’s already here work better. We’ll still be chasing our big-picture goals, and having conversations with government and industry, but we also want to take a holistic view and work with the people that are already invested in our region.

Mr Curtis said it was easy for simple things like professional development to fall by the wayside as small businesses face tightening budgets.

“Getting access to advice and expertise is a challenge for small businesses in our region” he said. “Our small business owners and operators don’t have the capacity right now to invest in anything but the essentials and they’re increasingly taking on more duties themselves.

“That’s leaving them little time to spend on things like professional development and networking.”

Paul White was born in Charleville in south-western Qld and grew up in various regional
Queensland centres before joining the Police Academy at age 18.

He spent 17 years with the Queensland Police Service, working in stations all over the State, finishing as officer in charge in Mount Isa.

Upon leaving the Police Service he joined mining company Xstrata (now Glencore) in 2003 as Human Resources Manager of the Zinc Operations in Mount Isa. At that time the Zinc operations employed over 1000 staff and contractors.

In 2005 he was offered a role with mining company Anglo-American and worked for the company across Mining Operations, Project and Head Office management roles.

In January 2011 he began his tenure as chief executive officer of NRL club, the Brisbane Broncos.
He is married to wife Angela and enjoys spending time with his four daughters, all of whom have now left school and are pursuing their own careers.

He is passionate about the sport of rugby league, which he has remained involved in since his childhood as a player, coach and now administrator. Paul also has a personal passion and motivation in working closely with Indigenous leaders and communities to provide improved educational and career opportunities.

In 2018 he was recognised by his community as one of 4 nominees for Queensland’s Australian of the year.